It took me a while to figure out a cool star pattern for my Wonder Woman Running Tiara pattern, and it seemed like such a waste to only use it once, so I've been busy crocheting stars like crazy trying to come up with something (else) awesome to do with them.

I know it was only yesterday, but I'm going to repeat the pattern here now, just for the sake of keeping all the starry stuff in one place.  I promise, you will thank me later when you don't have to bounce between posts to make your cute stars... 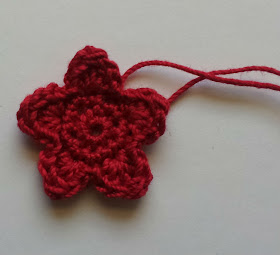 I discovered that, while a single flatty piece, they have cute rounded points, but if you sew two of them together the points become sharp and pokey and they look really good.  Just like a star should look!  It made me feel patriotic!  I wanted to star spangle my world!!!

Of course I had to do a red-white-and-blue garland.  I used size 3 crochet thread and a size d hook for the larger stars, and size 10 crochet thread and a size 8 steel hook for the yellow stars.  I stuffed them lightly to give them a little more shape.  I think these would make a super cute decoration for your year-round tree, or if you really went crazy you could decorate for 4th of July with a garland around your patio... You still have enough time if you start right now! 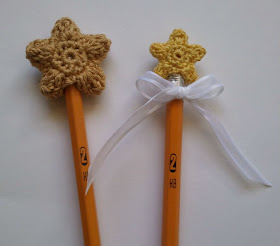 I sewed some stars together, leaving the bottom open, so that I could use them as pencil toppers.  I am thinking about cute stuff for Mims when she starts kindergarten in the fall, and I think these would be a hit.  I have been informed by my mom, who is a public school teacher, that perhaps these would be better 'at home' pencils, since the toppers can be removed and played with.  I will defer to her great wisdom, and plan a birthday party that needs princess and/or fairy wands for Mims next year... Ooh! If you cover the pencils with a fancy scrapbook paper, I think they would look extra cool (and less school-y).  These would also be cool for an end-of-the-year magic test-taking pencil... I hear that they only know how to write correct answers... 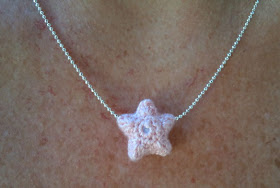 I used some size 10 crochet thread (made of bamboo fibers, yo!) and a size 8 steel crochet hook to make the star for this necklace.  I sewed it right onto the ball chain, stuffing it lightly to make it a little puffy and cute.  It doesn't slide easily, so if you try this, make sure you center it!  The bamboo thread is so soft, and the star weighs practically nothing, so I forget that I'm even wearing it.  I adore it.  Mims has requested several, so that she can have them in all her favorite colors. 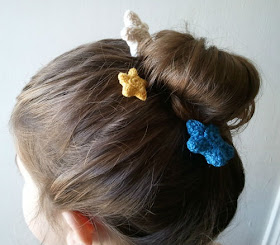 I attached some bobby pins through the stars to decorate Mims's bun today.  It looked so festive and fun, I'm a little jealous of her long hair... 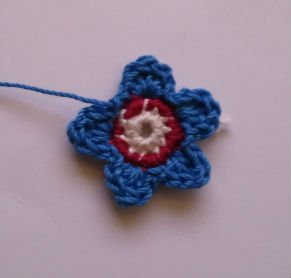 What I would not recommend is doing more than 2 colors per star.  This tri-colored experiment was a disaster.  I was sure you wouldn't believe that it was possible for me to make anything that was this awful, so I am posting a picture as proof that I screw up all the time... But seriously, if you want to do a two colored star, it think it could look cool, but the way the increases on the 2nd row go, it just doesn't look good with a third color.  Heed my cautionary tale... Don't do it! LOL!!!

The stars themselves are really appealing, just on their own.  When I was a kid I used to make origami wishing stars, and I think that a collection of these little crochet stars would be just as beautiful in a jar to tell someone how much you love them.  I could also see making these as keepsakes for a special occasion, you could even put a loop on them to use as a Christmas ornament.  I might even hang one in the car for Jake, to remind him that Mims and I love him.  Aww, so sappy today.  But, the stars are really cute, and once you start making them, your rational brain will justify making more and more to give away.

Fill your world with stars today, Dynamos, and share them with the people you love!